The content of the text is a conversation between Krishna and Arjuna taking place on the battlefield of Kurukshetra just prior to the start of a climactic war. Responding to Arjuna's confusion and moral dilemma, Krishna explains to Arjuna his duties as a warrior and Prince and elaborates on a number of different Yogic and Vedantic philosophies, with examples and analogies. This has led to the Gita often being described as a concise guide to Hindu philosophy and also as a practical, self-contained guide to life. During the discourse, Krishna reveals his identity as the Supreme Being Himself (Bhagavan), blessing Arjuna with an awe-inspiring glimpse of His divine absolute form. 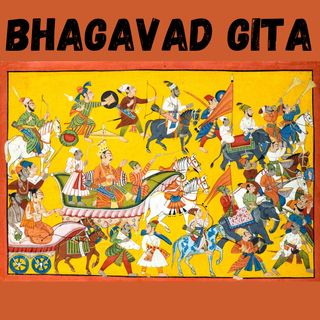